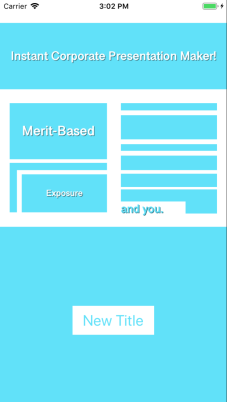 The Instant Corporate Presentation Maker was part of a short project where we had to make an app that utilized arrays to create a visual concept that engaged with the ideas of point-line-plane, rhythm, and balance. I thought it would be funny to make a system that randomly smashed together a bunch of adjectives and nouns common to corporate culture and see how much sense the random phrases made.

I wanted to make an app that looked like something out of an office that wanted to appear extra friendly, but was a soul-sucking experience to work in. I utilized lines to do this. The lines were created in-between a series of blue planes the served the dual purposes of creating the lines and eliminating white space. I played around with them until I settled on the design you see to the left. I liked it because it kind of looked like a bar code, and the idea of putting bar codes on people is very dystopian. I wanted the screen to have a symmetrical balance to appear orderly, but to have some asymmetrical components to show that the hypothetical company was still trying to appear like they could throw caution to the wind and break the rules in places.

Once you use the button a certain amount of times, you get the message on the right. I had this mental image of the person who wrote these presentations just giving up all pretensions of caring about the people working for them and putting how they really felt in the presentation. The idea made me laugh and I thought it would be good to have something in the app besides a random phrase generator, so I put it in.

Design-wise, I think I captured the feeling I was going for. The harsh, angular look of the design feels oppressive in the right ways, and I think I was able to effectively utilize lines, planes, and balance to achieve this. However, the bottom half of the screen is kind of barren. I think I should’ve used that space more effectively, because it kind of sticks out and drags down some of the other design.